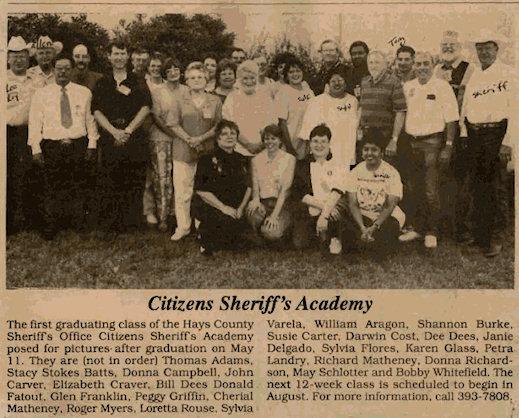 Class hours are from 6:00 PM until 9:00 PM, and meet on Thursdays.  There are some extracurricular activities that you will be involved in during the academy.  One Saturday during the academy, you will participate in a police driving exercise.  One Saturday during the academy, you will observe a demonstration by the Hays County Sheriff’s Office S.W.A.T. Team.  Afterwards, you will attend a shooting demonstration by the firearms instructors and then participate in a live fire exercise. Students will also have the opportunity to ride along with a deputy as an observer during their regular shift.

In order to attend the Academy, you must fill out an application and consent to a background check. Those persons with felony convictions, or who are currently on probation, and anyone who has been convicted for any offense involving moral turpitude are not eligible.  Applicants must be at least eighteen (18) years of age and either reside or work in Hays County.

Upon graduation, you are encouraged to become a member of the Hays County Citizens Sheriff’s Academy Alumni Association (HCCSAAA).  Alumni members become our volunteer base and are often called upon to assist the Sheriff’s Office with special events and projects.

Your successful completion can also lead to other opportunities of service through the Sheriff’s Office such as the Community Emergency Response Team, Volunteers In Policing Service, Victims Assistance, and Junior Deputy Academy.  Class size is limited to 20 people per class so it is important to get your application in early to avoid being placed on a waiting list.  Applications can be picked up at the Hays County Sheriff’s Office or filled out by clicking on the following link ( CSA_Application.doc ) and mailed in.

Disclaimer:
This site is maintained by the Hays County Citizens Sheriff’s Academy Alumni Association (HCCSAAA) for the purpose of coordinating and sharing information with its members, and the general public, as part of its mission to support the Hays County Sheriff’s Office (HCSO), especially the Community Outreach Division. Unless specifically noted to the contrary, all opinions and positions posted on the site are that of the HCCSAAA and not the HCSO. The HCCSAAA does not represent the HCSO in any official capacity or authority.

There are no upcoming events.